Thank you very much to everyone who took the time to participate in the #whywedoresearch survey. We have reviewed and analysed the results and are delighted to share them with you. Below are both numerical results and themes which have arisen through analysis of the free-text answers / comments.

We were blown away by the responses provided and have selected some statements to illustrate the types of information and suggestions you gave us. For those of you who made suggestions, hopefully you will have seen that we have already actioned a number of them over the past two months and actions taken have been made clear in the results below. The campaign is designed through an element of strategy formed by the collaborators team, and through evolution following the direction you have given us from this survey. Thank you.
1. Number of participants: 258

The 'other' category included respondents who identified themselves as 'carers', 'academics', 'R&D Managers'. There was a clear theme here that these people wished to make it very clear as to their identity.

3. How did you hear about the #WhyWeDoResearch Campaign

Other responses in free text section:
36% Meetings at work
2% Through being sent this survey on JISC mail / work email
18% Saw it in a newsletter
2% Through hospital Governors
1% Sorry, I can't remember

We anticipated the largest route through which people would have heard about the campaign to be through twitter however were delighted to find that respondents were keen to identify other routes.

5. Some people / organisations have contacted us directly to inform of impacts they feel the campaign has had on them. Do any of the impacts below resonate with you? Please tick all that apply. 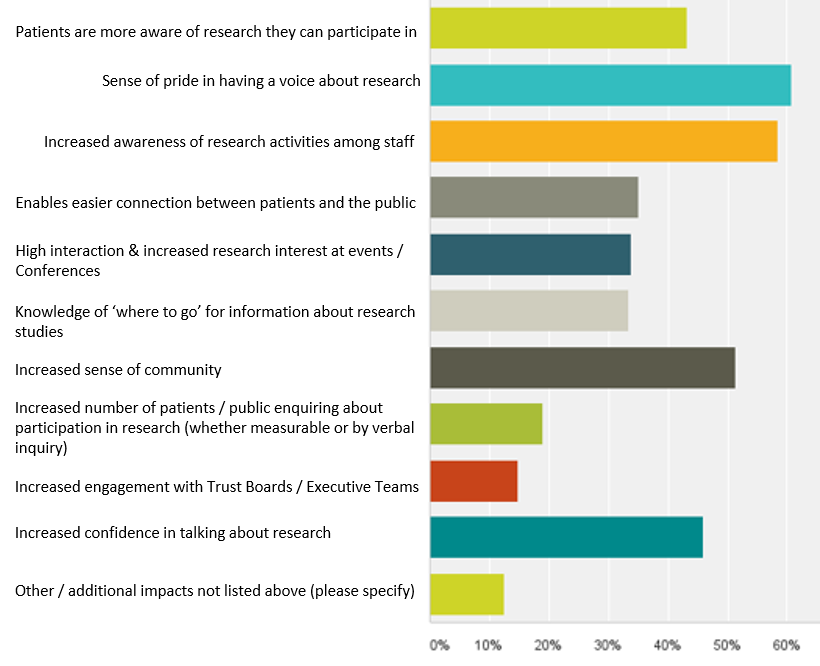 'Other' free text answers are listed below...

​Made me apply for a research nurse post – I GOT IT!
It’s hard to judge the impact in my role as I work cross-divisional CRN team, not patient facing
I’ve got a voluntary post at a hospital research department after getting involved in #whywedoresearch. I contacted my local hospital and it went from there.
Made me become a research nurse
Allows patients to feel useful for a change
This is the first time I’ve heard about the campaign
An amazing sense of achievement
Making research feel more accessible
Helps dispute the myth that researchers are nerds
A sense of fun and community
Connection with ‘unseen’ or less obvious research links
Increased interest in public engagement from research teams
Increased interest in research and the people that do it
Increased awareness of the power of social media
Increased confidence in my own ability as a nurse.
Made friends

8. Are you aware that we have #WhyWeDoResearch ambassadors representing organisations, public members and patient groups?
53% Yes
47% No

10. Details about becoming a #WhyWeDoResearch ambassador are available from www.whywedoresearch.weebly.com. Would you like to consider being an ambassador?

Some examples of the free-text comments are below:

Definitely once I’ve settled into my new role
Not at the moment
I am Canadian – not sure how/where this fits in
The hospital I will be working at already has an ambassador
I might in a year or two
Already feel a large part of the campaign so would prefer for others to have the same experience
My organisation is already going forward with this
I’m in NZ – sorry
Would love to talk about growing it!!! Email me [email provided on survey]
I sort of am one anyway
Not yet, too busy with other things including PPI involvement

11. The campaign purpose is to provide anyone involved in research in any way with a voice to express why they do what they do, and to raise awareness of research opportunities for patients, public and staff. After you got involved in the campaign, how much do you think research awareness has increased for you, or if applicable, within your organisation?

Below are a snapshot of some of the free-text comments for this question:

* Hugely. It's changed my life. I never knew research nursing existed, now I realise what I've been missing I'm determined to shout about the role from the rooftops...all because of this campaign
* I knew there were studies in my local hospital because I'm a regular patient there but I didn't know how to go about getting involved in them. I didn't know I could just ask. But also I now realise that we should be offered the choice at our appointments so I spoke to my registrar about this - he said there werent any studies in rheumatology at the hospital...that was 6 months ago and because of my interest, there are now two studies in arthritis. So the hospital listened and this campaign gave me the confidence to ask the question. Thank you
* 100%, more if it was possible to have > 100%. My family all know about it now and it's not just drugs is it. Everyone in my family are now participants in studies
* n/a just joined twitter and have yet to get involved in campaign. this will be an ongoing activity
* It has increased a great deal within this and other associated organisations. When attending a course other delegates from all over the country had heard of and were following the campaign.
* Research awareness has increased significantly within our organisation and the sense of pride of belonging to such a campaign is immense
* It's massively increased my awareness and this has been reflected in my cohort too
* I think it served to increase knowledge within research but not too sure about increase in awareness amongst general hospital staff, most staff probably couldn't even tell you what uniform a research nurse wears.
* I have sort of grown with it, I am a student nurse and increasingly becoming more involved in research
* My personal life has changed - I'm now in 3 studies!!!
* Personally it increased mine tremendously but most Nurses In Nigeria are not fully into research and have to be engaged in it
* I was already aware of the campaign & I enjoy hearing stories of how it's raised awareness, but I don't feel my organisation is very engaged with social media. It's a tough nut to crack.
* We have learnt more about each other's research
* I am not involved in the campaign
* None - feel little engagement from my organisation on Twitter, has an account but feels corporate.
* I work fairly independently right now - so impact is limited
* Definitely has aroused my curiosity!
* It has had a big impact on our organisation with a lot of research staff wanting to get involved.
* As a patient this campaign has raised my awareness. Firstly by getting involved in twitter, I've been able to connect with other patients and carers which has helped in ways other than 'just' research - it's brilliant. Awareness with my family and friends has increased hugely too.
* Haven't been involved in the campaign- knew nothing about it prior to this survey (and I work in a large NHS research unit!!)
* 100%! my entire family & lots of friends had no idea what types of research studies were out there...which is ironic really as we all fundraise for research charities all the time.
* I work at a research intensive university, but the campaign has helped people reflect on why they are in the business of research
* Not really but good to see the faces and passion behind the research.  Reseach can be isolating so forming a community of researchers is good
* Our R&D team are now on twitter. Campaign been discussed at committee meetings. Permission sought to become an ambassador for organisation :0))
* I think that the campaign has provided people with a voice to express what they do and give them a sense of pride in their work.  It has definatley increased my awareness of research and it has raised the profile of the NIHR and CRN's
* My organisation already know what I do as i'm employed as a researcher but I'm not sure it has increased in the population
* We are a large CRF but yet research awareness in NHS GG&C remains relatively low. I think #whywedoresearch has helped improve things but I think we need to do more on a local level to increase awareness
* Massively. I had no idea until my family talked about it over dinner. Then I got involved in #whywedoresearch and now I understand everything so much more. It's fascinating.